skip to main | skip to sidebar

We are traveling down to DC this Sunday (July 16th) to install TWO studios at the CORCORAN . Over a six week period various artists will engage with the studios and the public at the corner of NY Ave and 17 th St . 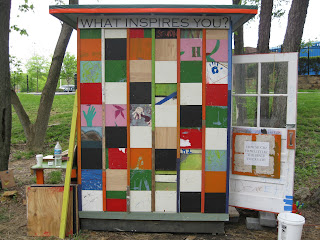 We are also installing another studio at THEARC , and inviting artists to engage w/the community there during the six week project . ALL studios will end up back at THEARC to begin a village project w/ DOUBLE NICKELs Theater group sometime in late August ....

We have several weeks where we will have invited regional artists to engage w/their community whilst we are in DC . We hope some of these artists will want to continue w/the project and sustain the project for a longer term ,
Posted by S. Draper at 5:28 PM 4 comments:

HFA at the CORCORAN GALLERY this SUMMER

We are pleased to announce that we will be installing one of our signature 6 by 6 Studios outside the CORCORAN Gallery in downtown DC this summer. There will be a series of short term artist residencies including artists from the Hudson Valley and NY area , DC and emerging artists and students who will take on various collaborations . We are planning a 6 week run starting around JULY 16th , but final details are still in the works.

We will continue our collaboration w/groups at THEARC during this project and plan to be crossing the river frequently during our time downtown . We hope to be working with students from the Washington Ballet summer camp as well as other groups at THEARC , including ARTREACH students .

We will be hatching various plans to collaborate w/THE DOUBLE NICKELS Theatre Group and Toni Ford during this time , as well as looking at starting their NEW Hybrid Home at THEARC .

We would like to thank TARA MALIK for her role in making this possible ...THANK YOU !!
Posted by S. Draper at 6:24 AM 1 comment:

APRIL in DC , SECOND WEEK of ARTISTS in RESIDENCE at THEARC

This is the second week of artists in residence at the Studio at THEARC , in DC . MATTHEW SLAATS and MICHAEL NATIELLO are sharing the week and have some things in common and then very different approaches to their work . Matthew has been captivated by GRAFFITTI MOSS and where it might find itself . Working with words that have been left on the Studio by a question and response project WHAT INSPIRES YOU ? Matthew has engaged with spaces that are either less traveled or off the usual path , in this case a series of words on the trees close to the Organic Veg garden . Michael has bought alot of junk mail and other recycled material w/him which he has been blending with other matter on site such as the Cherry blossom , to produce a variety of pulp for paper making . He has also started his day by wandering the neighborhood collecting discarded material for his Mandala assemblages . Both artists activate the space by bringing attention to normal or often unseen or unrealized aspects of the every day world that surrounds us . We look forward to seeing examples of their work at THEARC as the week comes to a close.
Posted by S. Draper at 2:12 PM 1 comment:

FIRST WEEK of the STUDIO at THEARC in DC 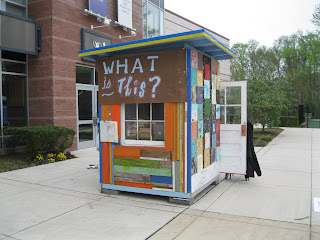 This past week was the first official artists in residence week at the Studio at THEARC in DC . Starting off this new project was NY artist CHERE KRAKOVSKY with her piece COMMUNITY KITCHEN TABLE .Each day she set up a round table and invited passers by to stop and chat and to take Tea . She also invited them to engage in various creative activities which were then

diplayed on or in the small Studio . Like the studio's simple shed like structure the kitchen table is both familiar and inviting which encourages any one to sit and talk to the artist on any given subject .

The DC Studio is part of the DCs Arts and Humanities Commission s 5 x5 project which began March 20th . Five curators picked 5 artists to install temporary works around the capitol .HFA is pleased to be an artist project chosen by ecoartspace's curator AMY LIPTON .

Since installing the Studio at THEARC we have had much interest in the project .We originally had a wish for the studio to stay at THEARC and be sustained by a group after we leave April 28th . It appears that wish has come true. TONI FORD , executive director of the DOUBLE NICKELS theatre group has been discussing many ways in which her group could collaborate w/HFA and sustain a structure at THEARC. Plans are afoot to create a hybrid studio at a new location between the garden and the parking lot .

In addition to this hybrid studio we will also leave a small original studio close to the garden and orchard , which will draw attention to this new endeavor of growing food and to a small field that overlooks the creek .

Next week artists MICHAEL NATIELLO and MATTHEW SLAATS will be the artists in residence at the Studio . Blenders will be churning as mixes of moss and pulp get made for a variety of purposes . More on that soon .
Posted by S. Draper at 4:25 AM No comments: 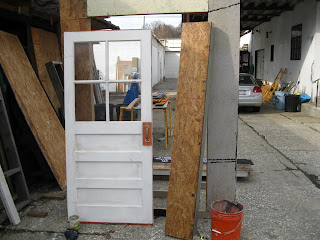 In and around the Ides of March we thought it a good Idea to sort through a bunch of material that we can bring to DC for the next few weeks , that will be used in all manner of creative ways . We thought that we'd give the studio going down a fresh lick of reclaimed paint , some of it having survived another winter freeze and needed using .... and repurpose a couple of windows and a new found door.

Our wish is that we leave a studio at THEARC to be used by different groups as a continued catalyst for creative activity and discussions . We will see where the prospective participants might want to situate the second studio which will be built the last week of April .

The material that gets repurposed , transformed and in other ways made over during the next few weeks , as well as being exhibited at THEARC in the last week , becomes part of the NEW exterior of the Studio that will stay as 1901 Mississippi Ave .

We look forward to installing the first Studio outside THEARC on Tueday March 20th 2012 .
Posted by S. Draper at 1:20 PM 1 comment:

HFA is happy to be a part of this first public art fund project in DC this Spring . Its part of a city wide celebration to mark the Cetennial of the gift to the US of the now familiar Cherry Blossom
Trees . HFA in collaboration with THEARC is setting one of its signature 6 x6 studios outside the entrance to THEARC. We think it'll make a marked visual focus juxtaposing the simple shed like design of our studio with the modern contempary structure of that which is uniquely THEARC .

HFAs focus once there will be to collaborate with the community immediately engaged with THEARC and the larger community of Anacostia . It will be these collaborations that will produce the bulk of the work at the studio and determine the final look of the studio which we hope will reflect its location and community .

Facilitating these individual and group projects will be seven artists who have worked extensively in the public realm in New York , Philadelphia and Portland OR .It is the wish of this group that the studio stay at THEARC and be used in a variety of ways continuing to share the dialog they hope to set up this March and April for a longer period and a larger audience .
Posted by S. Draper at 8:35 AM 1 comment: 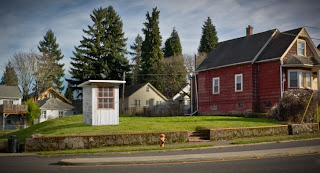 What is this all about?

Here's a link to the whole story.

Donate Online to the Habitat for Artists project or send your check / money order (made payable to SEE) to:

Please write "ecoartspace/habitat beacon" in the memo line on your check. Thank you!

In House Outhouse: The Private Reserve

See the Other Side of the Card